Stellenbosch is geared for safer roads this Festive Season

The Stellenbosch Municipality today launched its Road Safety Awareness campaign as we head into the Festive Season. Mayor Gesie van Deventer thanked all provincial and municipal traffic officials, as well as other strategic safety partners, who will be working around the clock to ensure that our roads are safer for drivers and pedestrians during this busy season. The following keynote address was delivered by Western Cape Traffic Chief, Mr Kenny Africa, at the launch of Stellenbosch Municipality’s Festive Season Road Safety Campaign today:

Let me start by thanking you Executive Mayor van Deventer – for the invitation extended me to join you, as you announce and launch the Plan that you have put in place to address the state of road safety within the boundaries of the Stellenbosch Municipality. It is also very significant that you do this on the day that the 16 Days of Activism against women and children abuse is launched nationwide. As much as the two focuses are addressed as separate campaigns, one can almost draw a parallel between the two campaigns when we look at the abuse that women sometimes suffer as drivers, while so many children die as pedestrians on a daily basis. One also realizes that today’s event comes at a time when the radio and TV-news as well as daily newspapers will once again start to highlight the numerous instances of crashes and fatalities that we normally experience during this time of the year. I want to use this opportunity to wish you well in the execution of all your plans and more specifically express appreciation to all officials under the command of Mr Harold Williams, who will stand in the forefront of the execution of these operations.

I wish to also say today that no law enforcement entity can afford to not operate according to a well-structured plan, which will guide their activities in an effort to minimize the devastating effect that road crashes have – not only on our economy, but also on family life.
As I stand here, representing all Provincial Traffic officials in the Western Cape, I wish to pledge our allegiance and support to your Plans, which will be revealed here today. I am also confident that Provincial Traffic Law Enforcement indirectly forms part of the strategic and operational activities planned within the Stellenbosch Municipality, as we have long ago realized that it is only through the implementation of combined and integrated deployment strategies that we will be able to successfully break the scourge of lawlessness and disrespect that many road users display on our roads. As Provincial Traffic, we will make sure that our officers patrol and guard over the arteries that join our remotest areas with towns and cities like Stellenbosch on a 24/7 basis. You will agree with me that as we enter the Festive Season, we will now start to see thousands of visitors travelling from all these areas and other provinces to the scenic beaches, coastal towns and holiday resorts in and around the beautiful City of Cape Town. However, it will be along those same routes that others will travel to import and convey drugs and other illegal goods and substances into our Province. Likewise, some of the same modes of transport that people will use to visit family and friends over the festive season, will be utilized to commit many of these criminal deeds. We as Provincial Traffic will guard the National and Provincial routes while you make sure that these killers are stopped from operating in your town, trying to disrupt and destroy the lives of children, families and eventually communities.

Adv. van Deventer – we all know the magnitude of the drug problem in our country and the devastating negative impact that it has on our communities. Believe me when I say that – since 2012 to date, Provincial Traffic alone has managed to confiscate drugs and illegal substances to the value of R165 million and these were done while officers are on normal patrol duties and other Traffic Law Enforcement operations.
In the same vein – just last week we confiscated a load of counterfeit goods like Springbok jerseys and Addidas sportswear to the value of R17million at one of our weighbridges. Maybe they thought it was a good time for sales, given the success of the Springboks in the Rugby World Cup!

Colleagues, I want to urge all of us here today to do all that we can to ensure that wrongdoers in every sphere and in all communities, are apprehended and that the law will take its course to punish those who willfully and knowingly break the rules that, in the end, leave children motherless and leave mothers crying for the loss of their children.  The commitment we are all making today will not come easy as we commit ourselves to working long hours in the heat of the burning sun as well as for some of us, right through the night, while many will sleep snuggly in the comfort of their beds under warm duvets and blankets.

Colleagues, whether these proposals and suggestions in the plans are all going to prove successful will surely be debated in the newspapers in time to come, but what is important is that we all need to stand together and simply say – enough is enough. Our Province has constantly been losing in the region of 1 600 lives per year in road crashes and if we do not join our efforts, we will never be able to stop this unnecessary killing of innocent lives as is reported in every news bulletin daily.

As a further demonstration of our commitment to this cause, Provincial Traffic Management has taken a firm decision to curb Provincial Traffic Officers from being granted annual leave over this time, so that we can ensure maximum visibility and availability whenever we are needed to assist motorists in any eventuality.

Mayor van Deventer, Programme Director, I am certain that your Festive Season and Strategic Traffic Management Plan will show a number of common issues that we also identified to be addressed at Provincial level. Ones that I could think of would be:
1. To bring about an improvement in general road user behavior;
2. To reduce the incidences of excessive speeding, drinking and driving as well as the removal of unroadworthy vehicles from our roads;
3. At a local and provincial level, we also need to address the issue of public transport to ensure the safety of all commuters;
4. Then there is the issue of distracted driving through the use of cellphones and of course the use of seatbelts by drivers and passengers in both front and rear seats;
5. Together with all of these road safety critical issues, we cannot afford to neglect the education and awareness programmes that we need to sustain to ensure that all road users are properly informed about the dangers that await them when using the roads, either as a motorist, passenger or pedestrian.

With all that being said and in conclusion, let me wish you well in all your endeavours and re-affirm our commitment to join forces with you in an effort to demonstrate the Western Cape slogan that says – “Better Together”. And to all of you – those who will be patrolling our streets during the Festive Season as well as those who will take time off to celebrate with their families ….
A merry Christmas and a prosperous 2020. I thank you.

Photos of the event are available on request. 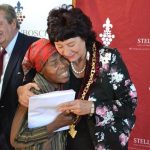 Next:
16 Days of Activism: “Speak out – be a voice for the voiceless”