Ten (10) suspects came on different dates (since July 2019) to the Driving Licence Testing Centre (DLTC) to apply for various documents. Prior to assisting them, their visas had to be sent to the Department Home Affaires (DHA) for verification. Final verification confirmation was received back by the DLTC, indicating that the visa permits of these foreign nationals were not legally issued by the DHA.

One suspect returned to the traffic department and was arrested upon his arrival. Following his arrest, criminal cases were opened against the 9 other individuals. The charges include fraud, being in possession of falsified visas and illegal entry into the Republic of South Africa.
An administration mark indicating fictitious paper work, has also been placed on the National Traffic Information System (NaTIS) against all of these individuals, meaning that they have been flagged by the system and are blocked from all driving -and/ or vehicle license related transactions, countrywide.

“The vigilance and cooperation of all officers and officials involved resulted in the successful discovery of this fraudulent operation and the arrest of one suspect. Any further attempts by the other suspects will result in their arrests. As a municipality we will continue to engage and cooperate with all spheres of government to ensure positive and effective service delivery and law enforcement”, said Mayor van Deventer. 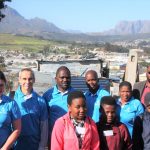