As part of our Human Rights Day celebrations, Executive Mayor Gesie van Deventer celebrated with the community of Jamestown today as another 160 title deeds were handed over. A title deed gives a person the ownership of a property and acts as a passport to participation in the economy. As a responsible and caring local government, the Stellenbosch Municipality understands that our people have a fundamental right to own property.

Mr Gert Bowers, who sadly passed away last year, would have been the oldest recipient today. He would have turned 97 years old this year. Ms Hester Bowers was however present to receive the deed to the house in which she and her late husband lived. The Mayor joined Ms Bowers in a candle lighting ceremony in memory of the late Oom Bowers. The oldest beneficiary who became a home owner today is Mr Johannes Williams, who turns 94 years old this year. 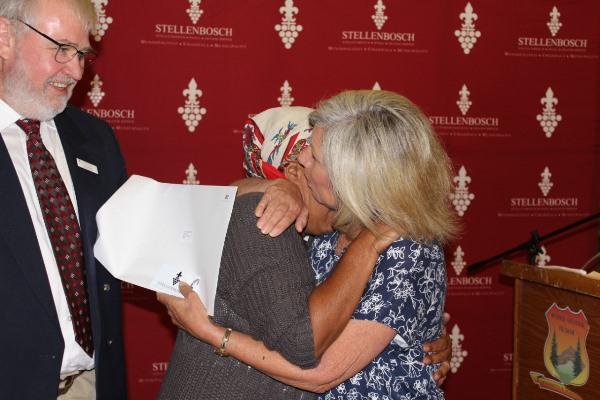 The processing and issuing of title deeds is the continuation of a commitment made by the Mayor upon taking office in 2016. At the time, the Municipality had a backlog of nearly 2700 title deeds and the Mayor promised to fast-track the process. Thus far, nearly 1000 deeds have been transferred to residents of the broader Stellenbosch including Kayamandi, Klapmuts, Kylemore, Mooiwater (Groendal) and Jamestown. The next title deed handover is already being planned.

The deeds handed over today form part of the Jamestown Housing Project in which 162 new houses were built. The project was a Breaking New Ground (BNG) development and cost R23.2 million. It was initiated to provide safe and dignified living conditions for Jamestown residents. Twenty-six (26) families from surrounding farms in Ward 21 were also included in the housing project.

The award-winning project started with the installation of bulk services in February 2014. Construction of the houses commenced in February 2016 and by December of that year, residents moved into their new houses. The Municipality made several enhancements to the houses, which include the installation of walkways, fences, modern novilon flooring and tiled roofs. The community was also significantly involved, through a public participation process, to name each one of the new streets in the area – the result is that all the streets are named after mountains. It therefore came as no surprise that the Jamestown Housing Project was announced as the 1st runner up nationally and the overall winner provincially in the Best Integrated Residential Development category at the Govan Mbeki Awards in 2017.

The Mayor emphasised the important role that title deeds play in redressing the injustices of the past and empowering families for generations to come. The Mayor urged all new home owners and their families to take good care of their new assets as it has the potential to unlock many economic opportunities for them and their children. 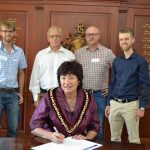