This morning, 29 October 2018, a group of approximately 40 protestors marched from the Magistrates’ Court in Mark Street to the Town House Complex in Plein Street after community leaders appeared in court.

This was an illegal gathering as permission was not granted in terms of the Gatherings Act 205 of 1993. The gathering furthermore failed to take place peacefully and with due regard to the rights of others.

While we reiterate our support of people’s right to protest peacefully, we strongly condemn the violence and destruction of property that occurred in parts of the Stellenbosch CBD today. Protestors damaged several properties, threw dangerous projectiles such as bricks and beer bottles and physically threatened municipal staff with knopkieries.

We cannot allow a small group of demonstrators to bring our town to a standstill. Their actions are illegal, unnecessary and unfair towards the hundreds of residents, business owners and vendors who are trying to make an honest living under very difficult economic conditions.

Law Enforcement Officials and the South African Police Service were called to restore calm in the CBD area and remain on high alert. The safety of all residents is our main priority. 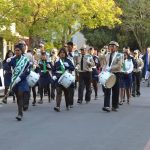